Toronto and many other communities around Southern Ontario will be playing host to the Pan Am and Para Pan Am Games this summer, the biggest sporting event ever to take place in the region.

In the build up to any major sporting event, local experts are often recruited to provide leadership and support in an effort to ensure its success. Very often, a test competition will be organized prior to the main event which affords the local organizing group the opportunity to review key functional areas, such as the event facility, security, transportation, workforce needs, and much more.

To that end, the sport organizing committee responsible for hosting the TO2015 Para Pan Am soccer competition (which consists of a 7 v 7 Para Soccer competition and a 5 v 5 Blind Soccer competition), played host to six of the Western Hemisphere’s top Para Soccer national team sides at the new Pan Am Sport Fields located at University of Toronto.  This tournament, which ran from September 19-26, 2014, was dubbed the CP-ISRA 2014 America Cup and it not only served as a test event for TO2015, but was also a qualifying event for the CP-ISRA World Championships being held in England this June.

TO2015 Sport Organizing Committee Co-Chairs, Dino Rossi and Matt Greenwood, made a proposal in 2013 to the Cerebral Palsy International Sport and Recreation Association (CP-ISRA) to bring an international Para Soccer tournament to Toronto as a test event for the 2015 Para Pan Am Games. Once given their blessing, Greenwood and Rossi set out to establish a Host Organizing Committee a full 12 months prior to the event and targeted volunteers with specific skill sets to help make it a reality.

Meeting monthly, and with full support of TO2015 staff, the committee were able to progressively build volunteer roles and responsibilities for each functional area required to pull off the event. In so doing, they also developed strong partnerships with the key staff members at the University of Toronto and numerous third party service providers.

A Technical Inspection was held six months prior to the competition, which provided CP-ISRA Technical Delegate Paulo Cruz with the opportunity to meet the volunteer team and visit the brand new sport field complex at University of Toronto, which was built specifically for the Games, to ensure everything was on schedule and would meet the needs of the athletes and technical staff.

All of the Committee as well as a fantastic army of 30 volunteers will be returning this summer to do it all again as part of the Para Pan Am Games.

A significant amount of attention was placed on this particular test event due to the historic location of the venue.   The new Pan Am Sports Fields at University of Toronto were built on the north lawn of Hart House, just south of Varsity Stadium. That plot of green space had not been very well maintained over the years, at least not for the purpose of sport, but has now been replaced by two world class artificial turf field surfaces, which were built to meet international Field Hockey specifications, but which can also be used as soccer pitches.  The location itself is stunning, surrounded as it is by centuries old halls of academia and it proved to be a great draw for students and sightseers alike, with many commenting on the perfect back drop created by Hart House and Soldiers’ Tower.  Following the completion of the Para Pan Am Games, these fields will be the sole responsibility of the University and will see an abundance of field hockey usage.

Logistically the location of the fields did prove to be a challenge to access easily, with numerous construction projects underway in the area, as well as major events being held in and around the campus. The return to school for up to 50,000 students also created some issues for organizers but, in the end, they were dealt with and didn’t hamper the event in any meaningful way.

These factors won’t be an issue this summer, thankfully, as designated Pan Am roads will make movement of athletes and team officials considerably easier.

Two groups competed in a round robin format over the first four days, including a notable performance by Coach Drew Ferguson’s young Canadian side, which drew 3-3 with a very strong Argentina team in the opening game of the event.

Underdogs took on powerhouses in the semi-final round, as Argentina saw off the United States 2-1 in a closely contested match. Brazil then overwhelmed Canada by a score of 6-1 with a great show of skill and athleticism that left fans excited for the final day of competition.

Because the 2014 America Cup was a qualifying event for the Para Pan Am Games as well as the World Championships, it was imperative to determine the 5th place finisher as only the fop five teams would qualify for TO2015. In many ways. the 5th v 6th place game arguably was the most dramatic of the final day of competition.

Mexico had brought a reduced squad and despite injuries and exhaustion they played with the passion and tenacity that we’ve come to expect of Mexican national teams. On this occasion, however, it was the energetic and skilled Venezuelans who were victorious, and they celebrated as though they had won the World Cup.  We look forward to welcoming Venezuela again this summer.

Old rivalries were on display in the medal games as Canada met the USA in a bronze medal match that, sadly, didn’t quite match the advanced billing. Canada never really got to grips with the pace and athleticism of the USA squad, who visibly wanted the victory more. In the end Canada were left licking their wounds after a 3-0 defeat, although a lot of positives could be found for Coach Ferguson. This event provide to be excellent preparation for this summer’s events and his young squad, which featured a number of teenagers, earned valuable experience. For some, it was their first taste of international soccer.

The final did produce the performance many neutrals had hoped for, with Argentina and Brazil playing their trademark styles of soccer to great effect. Brazil took a lead early in the first half and rarely looked at risk of losing it. They added a second and third goal without conceding before Referee Skye Arthur-Banning of the USA blew for full-time and cued the celebrations.

This event will enable the Ontario Soccer Association to provide three legacy components to the Ontario soccer community: 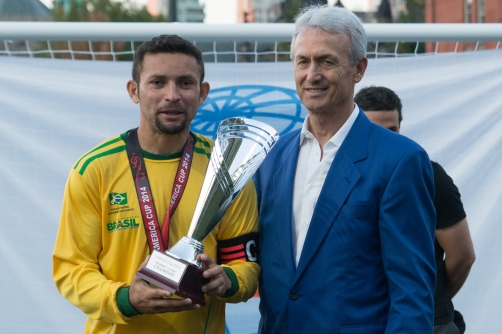 Brazil celebrate their 3-0 win over Argentina

OSA President Ron Smale offers congratulatory words to the US. 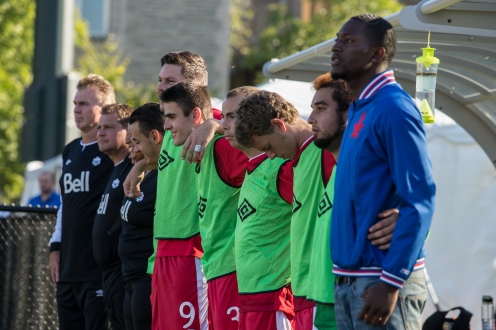 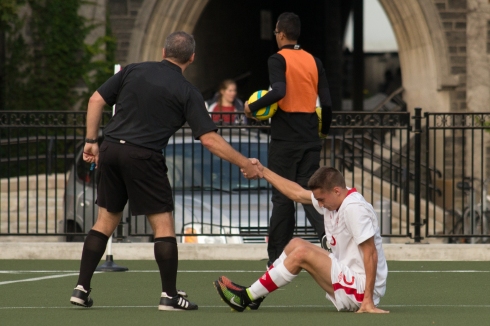 I'd love for you to share this and spread the word