The fact that the United States Association of Blind Athletes (USABA) stepped up and made this course happen was a big move forward for the game but the fact that they were open to welcoming three guest coaches from Canada demonstrated the enthusiasm to grow this game and the recognition that at some point in the very near future an international game will need to happen.

The course was held at the Maryland School for the Blind, just north-east of Baltimore between June 25-29th. Led by International Blind Sport Federation (IBSA) President Ulrich Pfisterer the 20 players and 15 coaches experienced an in-depth insight into the culture, history, safety and techniques that make blind soccer so unique.

A classroom session before heading out to the field enabled both sighted and visually impaired participants to clearly understand the themes for the day and to ask questions in a manageable way. When visually impaired players work actively on the field it can take time to bring everyone together and relay coaching points so doing this ahead of time made the best use of the groups time.

Field sessions were delivered at the purpose built 5’s soccer field on the school campus. Excellent work from the school maintenance staff ensured the side boards were the regulation height, angle and stood the impact of plenty of robust challenges. For the first time in Ulrich’s experience the sessions and game were played on grass. This brought with it two inherent challenges, firstly the grass slowed down the roll of our rattle balls making it harder for the athletes to learn dribbling and passing on a slow pitch. Secondly, the grass absorbed more of the balls rattle so players needed to pick up the sound quickly and react a lot quicker to get to the ball before the sounds died. The maintenance staff worked with us to cut the field even shorter and maintain clear lines for the coaches, while some welcome rain on Wednesday encouraged the ball to travel a little faster. 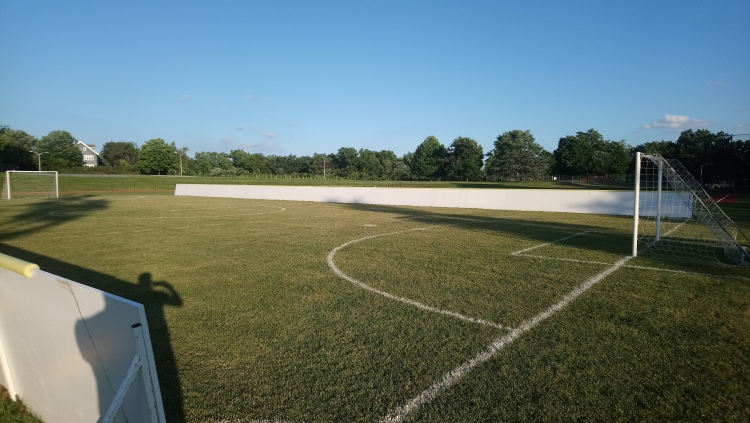 A diverse mix of US veterans, Sport Leaders and college students came together to achieve something magical during this week. Skill development including:

Passing and Receiving – both with the inside of the foot but predominantly with the sole of the shoe.

Dribbling – caressing the ball forward from foot to foot rather than a choppy dribble that makes the ball noisier and therefore easier for the opposition to locate.

Shooting – described as the switchblade, a quick toe poke while barely breaking stride as the player dribbles forward giving the goalkeeper less time to adjust and more power to the strike.

Communication – from player to player and coach/guide to player was regularly assessed for accuracy and succinctness. The use of the word Voy was introduced early in the course and will be discussed later.

Shielding – using both visually impaired and sighted players to challenge the participants on their adjustment to get body between the ball and the opposition which at times may also include use of the side boards.

Tactically the attendees learned about the predominant use of a 1-2-1 formation (the classic diamond formation) that allows for two triangles always giving a player two options. However, the group learned of the need for; a strong, central defender type player who connects well with the goalkeeper; the need for wide players who typically prefer to use the boards as a point of reference and have strong echolocation skills and finally a forward player who is comfortable in open space away from the boards but able to pick out the guides voice from behind the attacking goal.

All of this built towards a game on the final afternoon between Brazil and Argentina (team names selected by the athletes and a nod to the current World No’s 1 and 2). The quality of the game at times looked more like a wrestling match but for the most part all of the aforementioned techniques were on show. At the final whistle the enthusiasm and energy for more of this game was palpable. Open challenges for a U.S. v Canada match were made and discussion between each of the State representatives to come together soon.

The international word that is essential in blind soccer keeps players safe on the field by alerting opponents and team mates to their location. The word ‘voy’ is to be shouted when a player feels they are within 3 metres of the ball. The player on the ball doesn’t have to shout ‘voy’ as they already know where the ball is and players will assume someone is on the ball. Players are challenged with listening for the ball, their coaches and discerning between the ‘voy’ from their own teammates and the opposition. As you can imagine this creates frenetic moments in the game before players are clear on the players around them and have painted that picture in their mind of the players in their immediate vicinity. In other areas of the field away from the ball players are encouraged to communicate in general for safety.

For video of Ulrich’s opening presentation and match action from the ‘Argentina’ v ‘Brazil’ game click HERE. Jeff is working on building more videos from the sessions delivered by Ulrich. Look out for more content in the coming weeks.

I'd love for you to share this and spread the word